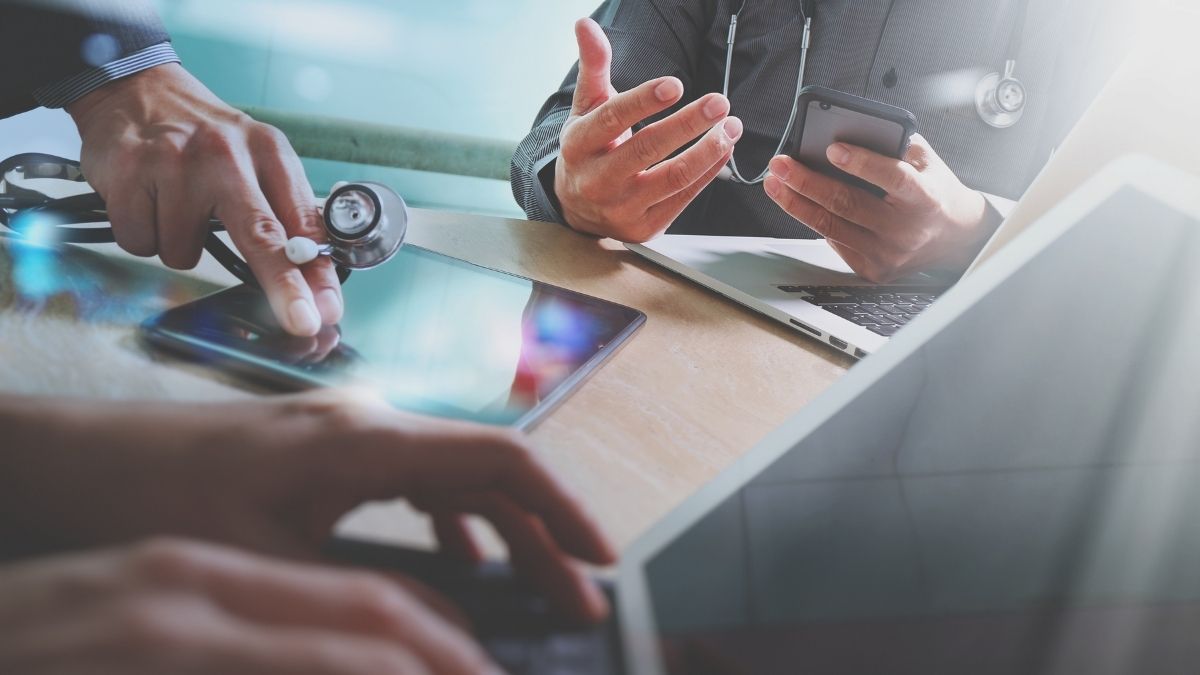 1. Testing the water for post-operative complications

Acute kidney failure is a common and serious complication that can occur after heart surgery. Affecting around a third of patients who have had heart operations, the treatment costs the NHS around £ 1.2 billion a year.

Rinicare, a team of clinicians based in Manchester, has developed a risk prediction technology called Stability UO. This uses artificial intelligence to analyze routinely captured data – especially urine output – from recovering postoperative patients. The platform can identify subtle signs of deterioration and act as an early warning system to prevent the development of dangerous complications.

The system can also identify low-risk patients, potentially allowing them to be safely removed from intensive care units to free up bed space faster. It has been approved for use in the UK and is being evaluated at several NHS hospitals.

“Acute kidney failure is a major concern for clinicians. It is 100 times more fatal than MRSA and it is associated with short and long term morbidity and mortality for patients, ”says Rinicare’s chief medical officer Stuart Grant, senior lecturer in cardiothoracic surgery at the University of Manchester.

Stability OU, he adds, has “enormous potential for reducing the incidence of acute kidney injury after cardiac surgery.” Notifying clinical teams in advance of a possible development allows them to take timely action to protect kidney function. This is vital for improving patient outcomes.

2. A giant leap forward in the treatment of osteoporosis

Osteoporosis is a progressive disease of fragile bones that affects over 3 million people in the UK. From the early years of the space age, NASA knew that its astronauts were losing bone mass at a significant rate during their time in zero gravity. His long search for an effective solution since then has led to the discovery of low intensity vibration as a treatment for osteoporosis.

Marodyne LiV, the first medically approved device that can both treat and prevent disease, resembles a scale with mains power. The patient simply stands on it. The machine calibrates itself according to their weight to make sure it gives the right level of high frequency vibration to stimulate their osteoblasts (bone building cells) and inhibit their osteoclasts (bone resorption cells).

Barrett’s esophagus is a condition of the esophagus that can be a precursor to cancer of the esophagus. Eight out of ten patients diagnosed and treated for this type of cancer at an early stage will survive it for more than five years.

To help identify cases of Barrett’s esophagus faster, cheaper, and more comfortably than a conventional endoscopic biopsy, Cyted has developed a test kit called the Cytosponge. It takes the form of a pill-sized capsule attached to a length of fine wire. The patient ingests the capsule and most of the wire. Its covering dissolves in the stomach after a few minutes, leaving a rough spherical sponge, which collects a sample of tissue from the esophagus as it is pulled upward by the thread to be regurgitated.

The NHS is deploying 3,500 kits in England and Scotland. A patient who had a Cytosponge test as part of a trial in her GP office believes it could have saved her life.

“If I hadn’t, I could now be walking around with cancer,” she says. “The survival rate for esophageal cancer is not good, so knowing that I have the green light is fantastic. “

A comparable piece of unmanageable technology in development focuses on the other end of the digestive system. NHS agencies are working with Danish firm CorporateHealth International and West Midlands 5G on a pill-sized device containing two tiny cameras. Once it reaches the patient’s large intestine, this smart technology will capture and send images directly to the lab for analysis via a 5G network, delivering what’s called a capsule endoscopy of the colon.

“Bowel cancer is the second deadliest cancer in the UK, accounting for around 20,000 deaths each year,” notes Professor Ramesh Arasaradnam, senior gastroenterologist at Coventry University Hospitals and the Warwickshire NHS Trust. “But we also know that, if caught early, the prognosis is good.”

4. A helmet for a healthier state of mind

Clinical psychologist Daniel Månsson and neuroscientist Erik Rehn have developed Flow, a medically approved home treatment for depression. He uses a device that looks like a pair of headphones to deliver transcranial direct current stimulation. It’s a proven method that applies a tiny amount of electricity to the dorsolateral prefrontal cortex – an area in the front of the brain that has been shown to be less active in people with depression.

More than three-quarters (81%) of patients see a reduction in symptoms after three weeks of using the headset in conjunction with a behavior therapy app, which includes a virtual therapist to empower and motivate users to manage their treatment. This combination “removes barriers to access and offers a unique way to treat depression,” according to Rehn.

“When we designed the Flow headset, we wanted to change the way depression treatment is accessed, especially a method that many people wouldn’t prescribe as a first-line option,” he says. “Very few mental health services offer brain stimulation unless the case is severe, but Flow is very effective in treating mild symptoms.”

A team of artificial intelligence experts and oncologists have created an AI platform capable of detecting virtually imperceptible differences in the appearance of cancer cells. These variations reveal important information about the molecular state of cells, which in turn can inform the most appropriate treatment choices.

Breast cancer is the most commonly diagnosed cause of cancer death in women. In the UK there are around 55,900 new cases every year. Clinicians using Panakeia’s PANProfiler image analysis platform can receive information to help them make breast cancer treatment decisions within 15 minutes, instead of waiting days or even weeks for them. laboratory test results. It has recently been approved for use in the UK and Europe.

“This exciting technology has the potential to save laboratory resources and also improve the time to biomarker results for patients with invasive breast cancer,” says Sarah Pinder, professor of breast pathology. at King’s College London.

Panakeia plans to develop its technology to fight other types of cancer. His mission to speed up diagnostic and treatment processes is driven by personal experience. Company co-founder and CEO Pahini Pandya – a former cancer researcher – knows full well how stressful waiting for test results can be.

“When I was doing my doctorate at King’s College London, I had my own fear of cancer,” she explains. “I had to wait almost a month to get the green light, which was a painful experience. But I also knew what the challenges were and why it was taking so long, because I was conducting these tests myself. It was a pivotal event. “