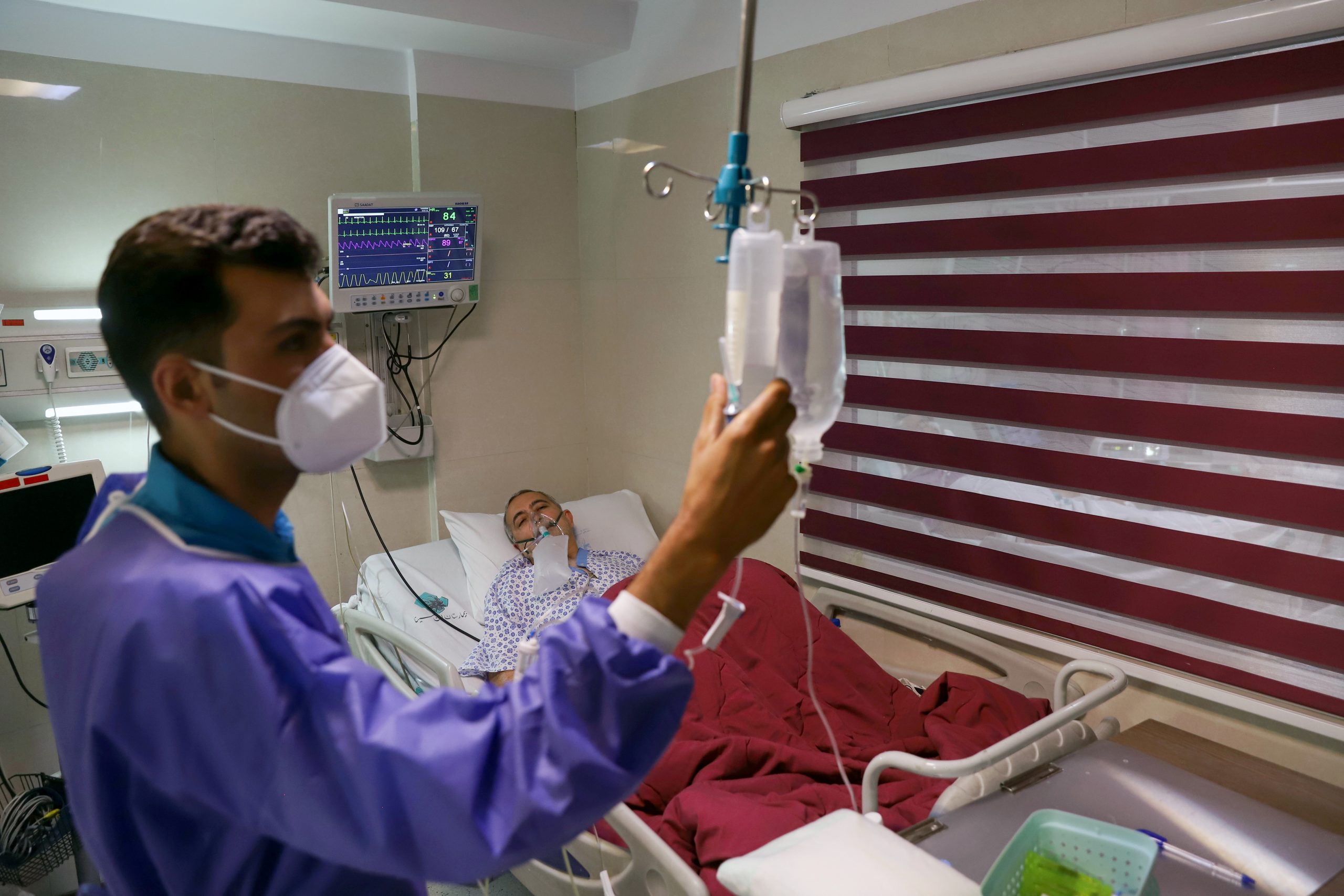 On November 17, the number single vaccine doses administered in Iran have exceeded one hundred million. An official from the Ministry of Health noted about 80 percent of Iranians over the age of twelve have received at least one dose and 60 percent of this group are fully immunized. Despite these reassuring statistics, Iran, which already has the most number deaths and cases in the Middle East – appears to be entering a sixth wave of COVID-19 with no end in sight.

Ideological policies have put Iran at a disadvantage since the start of the pandemic, which has now killed more than 130,000 people according to official statistics (and strongly under-reported). The Iranians attribute inadequate testing and a slow rollout of vaccines to policies ordered by Supreme Leader Ayatollah Ali Khamenei. Despite all the warnings, the regime has called on the Iranians to return to normal life, risking a further increase in cases with the reopening of schools and the return of workers to their offices.

The epidemic was initially covered up because the religious center of Qom was the first hotspot of the pandemic and because the leaders did not want to postpone the legislative elections of February 2020. Blatant lies by the Minister of Health at the time, Saeed Namaki, and President Hassan Rouhani, who boasted imaginary successes in the fight against the pandemic, made matters worse.

Then-President Donald Trump’s belated condemnation of China also helped the regime oversimplify the pandemic into a power struggle between world leaders unrelated to Iran. However, when the international shockwaves abated and the pandemic became impossible to ignore or blame on others, the Iranian decision-making system proved unable to put in place effective policies to control the spread of the disease. .

Lockdown was not an option as Iran was already suffering from a deep recession, high unemployment and US sanctions. Fortunately, the first wave coincided with the Nowruz holiday in March 2020, but Iran has been unable to control future outbreaks.

The government did not have sufficient funds to preorder or invest in vaccines, while developing countries did not sell vaccines to Iran, at least in the early months. Even China and Russia had reserves because the primary raw materials were made in the United States. Thus, Iran decided to opt for the national development of a vaccine.

The state-owned Barakat Foundation began work when other producers were already in phases two or three of vaccine development. The foundation and the Department of Health announced several dates and even number of vaccines to be delivered, such as fifty million doses by the end of summer 2021, but it proved costly Propaganda which prevented the importation of vaccines even for medical personnel.

There has also been a political battle over whether Iran should buy Western or Russian and Chinese vaccines, with Khamenei personally stepping in to ban the doses made in the US and UK in January. In addition, there was a wave disinformation from anti-vaccine clerics to “stop treating Iranians like lab rats.” In the fall of 2020, Turkey and the United Arab Emirates (United Arab Emirates) has agreed to test the third phase of Chinese Sinopharm in trials. But Rouhani was not ready to take the risk of alienating powerful clerics. Additionally, his government was unable to provide a down payment for Chinese and Russian vaccines and others provided by the COVAX consortium, fearing that US sanctions could block both the funds and the source of funding. While Turkey and the United Arab Emirates have used China’s Sinopharm vaccine to successfully control the pandemic, Iran has wasted precious time.

Khamenei’s ban on US and UK vaccines has encouraged national opposition to all vaccines. In January, some 2,500 doctors from the extremist camp, including the current Minister of Health Bahram Einollahi and his two main assistants,protested import vaccines or invest in their production abroad.

The result was a fourth and fifth wave of COVID-19 in the first half of 2021, with Iran not only having the highest number of cases and deaths in the Middle East since the start of the pandemic, but also the country. least vaccinated in the region. . In August, public pressure on the Supreme Leader finally forced him to end his import ban and end anti-vaccination campaigns (with the caveat that Western vaccines are not made in the United States. and the UK). Meanwhile, Ebrahim Raisi won the June presidential election and the same hard-line supporters and clerics who had opposed the vaccination rushed to import vaccines from any available source and start mass vaccination in the fall.

The numbers exceed what is officially reported

Excess mortality is a term that refers to the number of deaths during a seizure beyond expectations under “normal” conditions. Technical studies carried out on excess mortality among Iranians conclude that “the death rate from COVID-19 is 2.5 times higher than statistics announced by the Ministry of Health,” according to a report published in April by the International Journal of Infectious Diseases.

Iran’s National Civil Registration Organization reports the number of deaths in Iran every week. Its statistics Pin up that Iran has experienced about 257,000 additional deaths from the start of the pandemic in January 2020 until the end of summer 2021. In those twenty-one months, around 915,000 people have died. The corresponding figure for the 21-month periods of previous years was approximately 658,000.

The number of cases and hence the rate of infection and positive tests are also underreported due to a lack of testing materials. The number of tests per thousand people has never exceeded 1.5 in Iran since the start of the epidemic. The corresponding number for the other countries in the region has been between 2.5 and 3.5.

According to my calculations, the ratio of confirmed positive tests to the total number of tests has always been dangerously high in Iran, sometimes over 46%, which means that 4 to 5 people in ten Iranians were HIV positive. The rate has been falling for two months and has stabilized around 8 to 10%. The corresponding rate among Iran’s Arab neighbors is 1 to 2.2 percent.

The number of cases per 100,000 population was in double digits until early November and fell to single digits just two weeks ago. The number of days testing was around 25,000 per day in August 2020 and gradually increased to 105,000 to 110,000 in August 2021. If the detection rate had been at the regional average of 3%, the total number of cases in Iran should have been to be nearly thirteen million, more than twice the 6,069,559 cases reported by the Department of Health on Nov. 19. These higher figures also support an excess mortality rate of 220%.

That said, the general trends of the daily figures reported by the Department of Health and the movements of the indices can be considered correct. No one can be sure of the accuracy of absolute numbers unless and until the number of daily tests increases to an acceptable range. However, the trend in daily cases clearly indicates an end of the fifth wave, with the number of cases and deaths declining.

But the danger is not yet over. With the reopening of schools and universities, high-risk businesses like movie theaters, and growing international concern over the omicron variant, Iranians constantly hear warnings, even within the regime, that such policies are wrong and must be. revised. Otherwise, a sixth a wave of increases in cases and deaths will be inevitable.

The author, who is familiar with the Iranian political scene, requested to remain anonymous.

Image: An Iranian nurse cares for a patient suffering from COVID-19 in a hospital as cases of coronavirus disease (COVID-19) increase, in Tehran, Iran on July 28, 2021. Majid Asgaripour / WANA ( West Asia News Agency) via REUTERS